Shape is generally cylindrical or elongate to ovoid, with lengths ranging from 0.12 to 3.15 inches, although most species are under 0.79 inches.

A variety of bright colours are known, often in complicated patterns. The wing covers (elytra) of some species are metallic blue, copper, green, or black in colour. 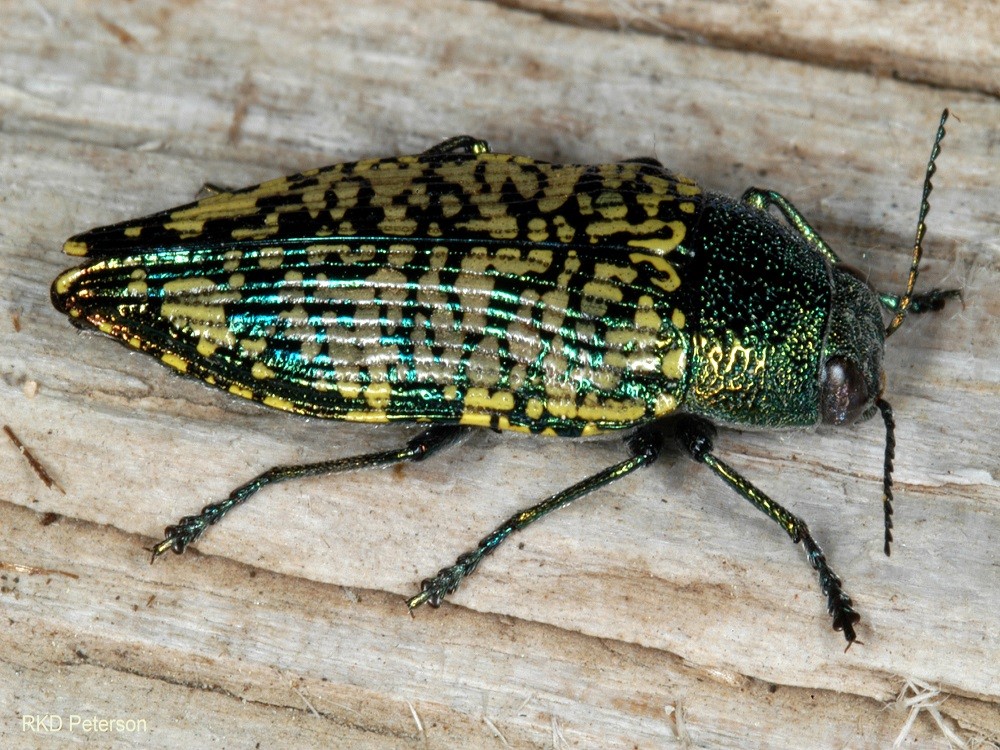 The Adult beetles are usually short-lived, surviving for a few weeks. Adults emerge in the spring and summer depending on the species. Eggs are laid in crevices in the bark for wood boring species. Larvae develop inside the plant primarily just under the bark for wood borers or inside stems or roots. Leaf-mining species may have several generations per year. However, most species have one generation per year or take multiple years to develop. There are a few records of development over 8 years. Pupation occurs inside the plant.

This family of beetles is known as jewel beetles or metallic wood-boring beetles, because of their glossy iridescent colours and is among the largest family of the beetles, with some 15,000-species known in 450 genera. In addition, almost 100 fossil species have been described.

Mouthparts are for chewing. It is important to know the host plant for a particular species of metallic wood borers. Some of the larger species feed on pines, although most woody plants have at least one species that feeds on it. Larvae usually tunnel just under the bark surface, but may go into the heartwood. Tunnels are oval in cross-section and often have a zigzag pattern that increases in width as the larvae grow. Emergence holes of adults are most likely to have a semi-circular shape or at least one relatively flat side. Leaf mining species are present on oaks and a few small herbaceous plants where they form short broad leaf mines. Adults of some groups, especially Acmaeodera, are found on flowers where they probably feed on pollen. A few of the adults feed on leaves.

The Larvae of most species feed in trunks, branches or twigs of woody plants, usually when the plant is dying; some species remain in wood after it is used as building materials and adults emerge up to several years later; medically harmless.
Adults can be collected in the field with a sweep net or a beating sheet held under trees or shrubs. They are best collected on the sunny side of trees in the spring. The larger specimens like Chalcophora, Chrysobothris and Buprestis may be found on freshly cut logs. Adult Acmaeodera can be found on flowers while Agrilus are more common on leaves.