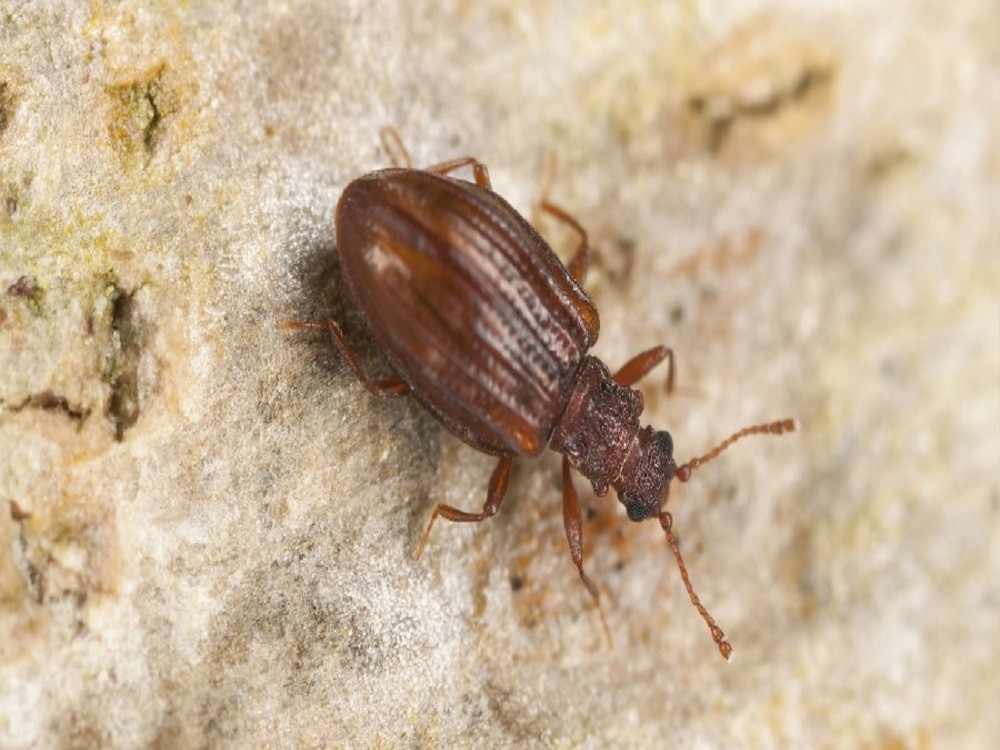 Plaster beetles belong to the family Lathridiidae, which contains many different genera and species. These are tiny beetles for the most part and different types are shaped and coloured a bit differently thus making identification by an uneducated eye more difficult. Plaster beetles may also be known as minute brown scavenger beetles or lathridiid beetles. Most plaster beetles are good fliers and may be found attracted to window sills, sinks and light fixtures. These beetles obtained their name from the time when walls in homes were constructed of wire mesh and wet plaster. Invariably, excess moisture behind wallpaper installed before walls had dried promoted mould growth, which served as food for these beetles. As populations of the beetles grew large, beetles would begin to exit from their breeding sites, often appearing by the hundreds or thousands. The life cycle of plaster beetles can be completed quickly, occurring in as few as 13 to 28 days, which results in a large number of beetles. Newly constructed homes and buildings use prefabricated drywall boards, therefore problems with plaster beetles are less often encountered. Because plaster beetles are fungus feeders, they can thrive in any building where there is a water leak, poor ventilation or other sources of moisture that permit the development of moulds inside walls or other voids. Related beetles, such as the foreign grain beetle (Ahasverus advena), the silky fungus beetle (Cryptophagus laticollis) and the cellar fungus beetle (Cryptophagus cellaris) are all fungus feeders that may be found living with plaster beetles or in conditions preferred by them.

These beetles develop wherever suitable moulds might grow on which the beetle larvae can feed. Plaster beetles occur naturally outside buildings and may be attracted to homes and buildings by exterior lights. Any location within a structure where moisture may persist due to a water leak, condensation or inadequate ventilation can be the source for a plaster beetle infestation. Additionally, some species of plaster and fungus beetles may also infest mouldy grain or other food products, thus may be found where grains and grain-based products are stored or processed.

The key to controlling plaster beetles is locating and correcting the excess moisture that is serving as the breeding source. Sometimes when a leak is fixed or ventilation is improved, steps are not taken to dry out the area that has become wet. The area then continues to support moulds, allowing plaster beetles and other fungus feeding beetles to thrive. Once the moisture issues are corrected, treatment by a pest management professional may be beneficial in reducing the numbers of beetles seen.