Adult mealybugs size 0.1 to 0.25 inches. They are soft bodied oval distinctly segmented insects that are usually covered with a white or grey mealy wax. 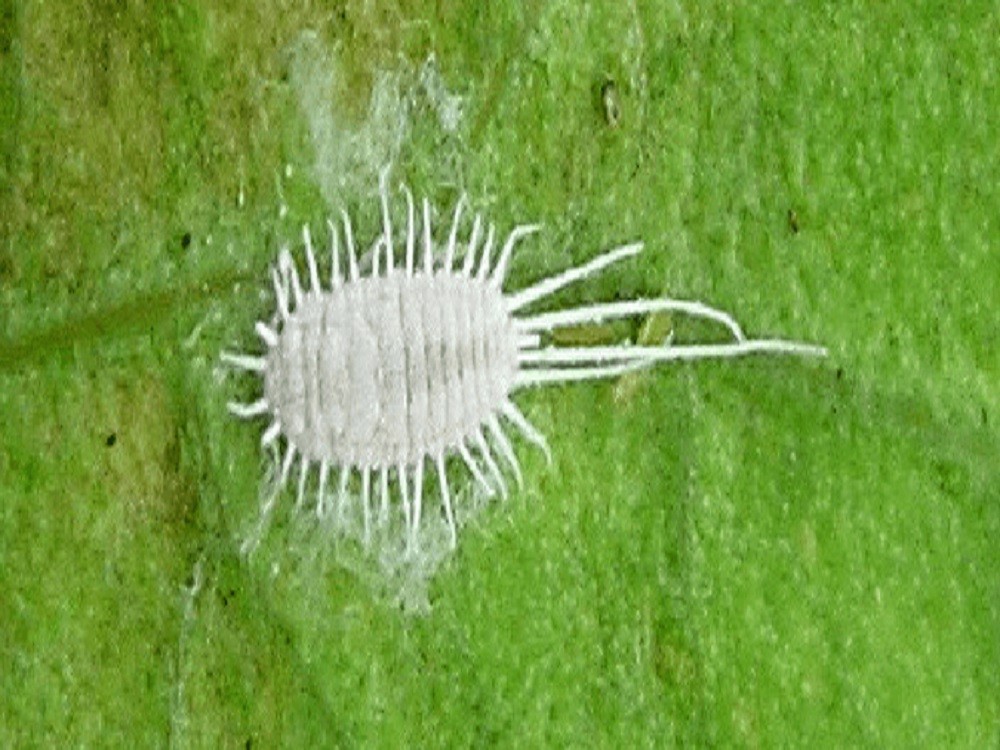 The mealybug is an unarmoured scale insect found in moist, warm climates. Many species are considered pests as they feed on plant juices of greenhouses plants, indoor plants and subtropical trees and also act as a vector for several plant diseases.

Mealybugs are sexually dimorphic: females appear as nymphs, exhibiting reduced morphology and lack wings, although unlike many female scale insects, they often retain legs and can move. Males are smaller, gnat-like and have wings. Mealybugs do not undergo complete metamorphosis in the true sense of the word. However, male mealybugs do exhibit a radical change during their life cycle, changing from wingless, ovoid nymphs to wasp-like flying adults.

Mealybugs occur in all parts of the world. Most occur naturally only in warmer parts and get introduced into greenhouses and other buildings in cooler countries.

Mealybug females feed on plant sap, normally in roots or other crevices and in a few cases the bottoms of stored fruit. They attach themselves to the plant and secrete a powdery wax layer (hence the name mealybug) used for protection while they suck the plant juices. The males on the other hand are short-lived as they do not feed at all as adults and only live to fertilize the females.

The most serious pests are mealybugs that feed on citrus. Mealybugs only tend to be serious pests in the presence of ants because the ants protect them from predators and parasites. Small infestations may not inflict significant damage. In larger amounts though, they can induce leaf drop. In recent years, some of the mealybug species have become invasive pest in localities posing a great problem to the new ago-ecosystems..

• If the infested plant can tolerate the cold, place the plant on a windowsill during cold weather. This will attract the mealybugs to the leaf furthest from the window, where they can be wiped off with a cloth.
• Ladybird larvae and adults feed on mealybugs and can be used to control an infestation.
• Mealybugs can be controlled using the fungus Lecanicillium lecanii.
• Insecticidal soap is effective against mealybugs. It is commercially available and can be purchased online or at a supermarket.
• An aqueous solution containing 50% v/v isopropyl alcohol and 1% w/v sodium dodecyl sulphate (found in most household detergents) is effective against mealybugs. Isopropyl alcohol dissolves the outer waxy covering, while the sodium dodecyl sulphate attacks the mealybugs themselves.
• Diatomaceous earth can be applied around the stem of the plant. Diatomaceous earth contains small silica particles that are trapped within the joints of ants. They cause irritation and eventual death. Diatomaceous earth is especially useful for an infestation that has developed a symbiotic relationship with local ants.
• Diazinon can be used, but often requires multiple applications.