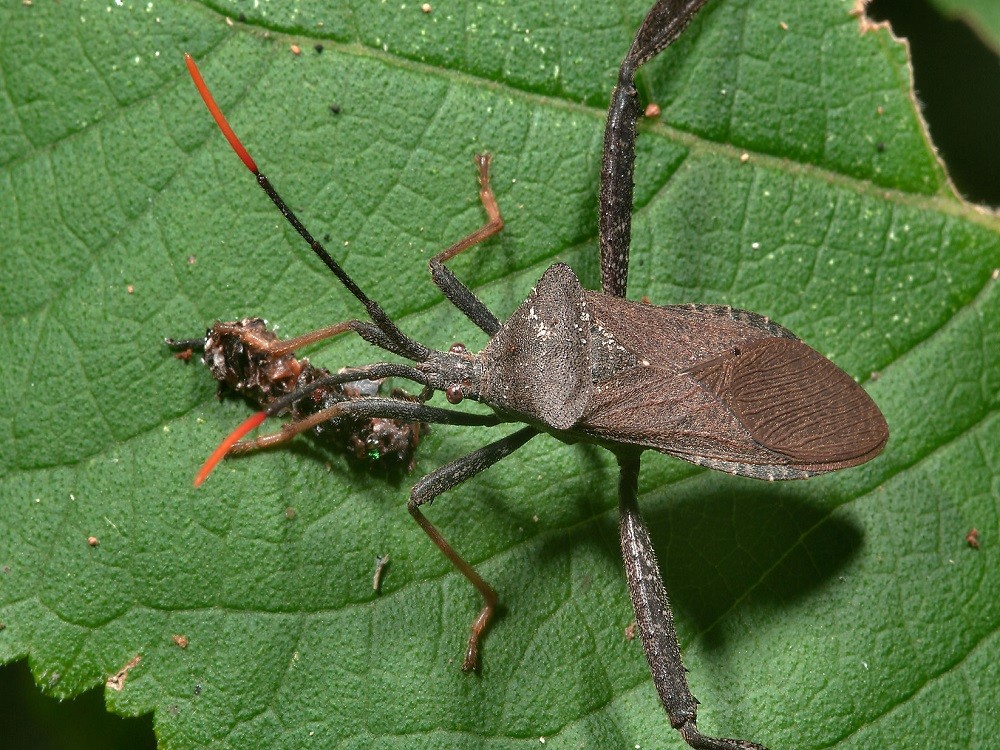 Leaf-footed bugs are so named because the hind legs are flattened and shaped like the edges of leaves. A variety of leaf-footed bugs may migrate into homes seeking a spot to overwinter. In most cases, the number of bugs involved is small, but on occasion, a single home or building may become particularly attractive to these bugs and other overwintering pests. Some species produce an obnoxious strong odour when handled or disturbed. One of the more common leaf-footed bugs that may enter homes is the squash bug, Anasa tristis. Squash bugs overwinter as unmated adults and mate the following spring after they return to the garden. Another, the western conifer seed bug, Leptoglossus occidentalis, feeds on the seeds of several species of pines and Douglas fir and has increasingly become a more common occasional invader pest in structures. Eggs are laid on typical host plants in late spring, and the nymphs feed on needles and young cone scales. They mature into adults by mid-August, and may fly to homes in fall to overwinter.

These insects live outdoors and feed on various types of plants.

Once inside walls, leaf-footed bugs may be difficult, if not impossible, to totally eliminate. Prevention is the best strategy. Seal exterior cracks on holes on the home or building’s exterior. Equip vents with tight-fitting insect screens. If leaf-footed bugs are already inside walls, sealing cracks around the windows and inside the doorframes can deny the bugs access to the interior part of the structure. Where large numbers are entering an attic or false ceiling, a pest professional may place an insect light trap in the space to capture most of the bugs before they can enter the rooms below.