Tiny in size with adults measuring 0.125 inch, while young nymphs may be pinhead-sized. 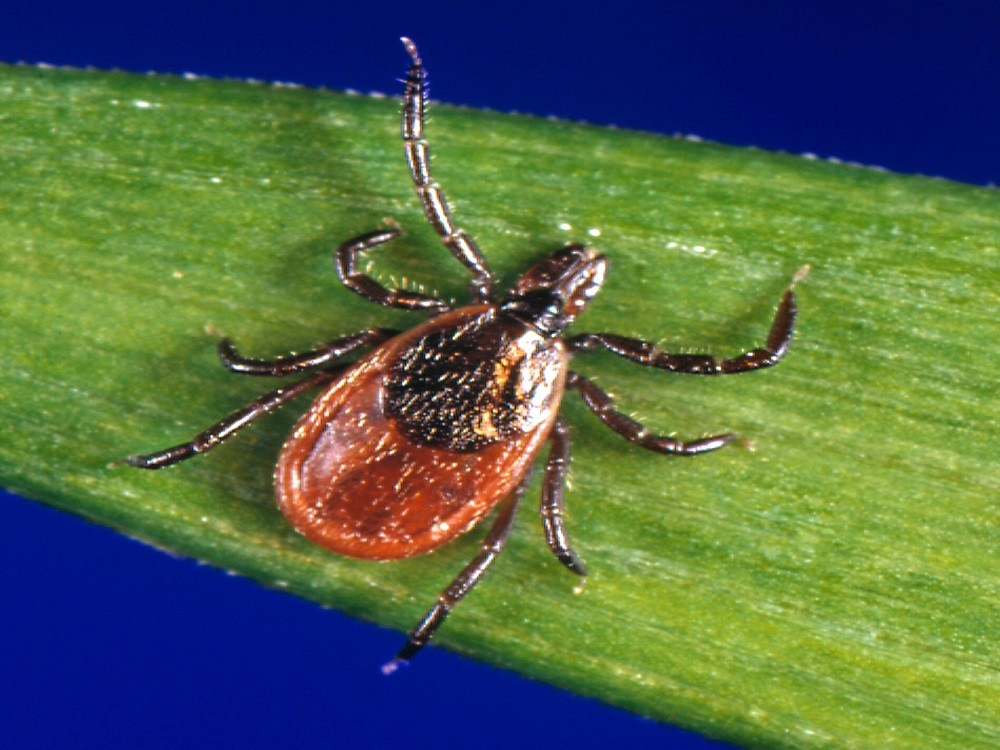 Like all ticks, the black-legged tick is a bloodsucking ectoparasite. Ticks require a blood meal at each stage of life in order to grow and the female will engorge herself with blood to obtain the nourishment necessary to produce the thousands of eggs she will lay soon. Commonly known as the deer tick, black-legged ticks have a two-year cycle beginning in the spring when the female tick deposits her eggs. Despite the thousands of eggs produced, only a small percentage will survive to maturity. Black-legged ticks are the primary vector of Lyme Disease and are common in wooded areas and fields where mammalian hosts such as deer, rodents and humans live. The tiny larvae get their first blood meal from rodents, mainly the white-footed mouse. Ticks imbed their mouthparts (not their entire head, as some commonly believe) into their host. They inject an anti-clogging agent to keep the blood from clotting so they can feed. During feeding, black-legged ticks may inject the spirochete bacterium (Borrelia burgdorferi) which causes Lyme Disease. Due to the small size of this tick, its presence can go unnoticed for several days if the tick is attached in an inconspicuous area of the body, such as on the back or under the hair on the head. This increases the potential for transmission of disease if the tick itself is infected.

Lyme Disease was first detected in 1976 in Lyme, Connecticut when an unusually large number of children suffering from similar symptoms came down with an unidentified illness later found to be transmitted by the black-legged tick. In 1981 the causative pathogen, a spirochete named Borrelia burgdorferi, was isolated and confirmed as the cause. Studies have shown that 90 percent of the black-legged ticks may be infected with Borrelia burgdorferi.

Lyme Disease most often begins with the appearance of a spreading rash at the site of the bite. This rash, called ECM, is seen in about 60 percent of patients. Most victims of Lyme Disease report a flu-like illness at first and often dismiss the symptoms as a “24-hour bug,” overexertion or lack of rest. Lyme Disease is very difficult to diagnose, because each victim’s symptomatology can be different.

Three distinct stages of Lyme Disease have been described, but these stages may not appear in all patients, may overlap, or often may occur out-of-sequence. The different stages may mimic the symptomatology of other diseases further conflicting correct diagnosis. Stage One involves the ECM rash and the flu-like illness. Stage Two involve neurological and cardiac problems. The disease can cause malfunctions in the electrical signals to the heart and has caused doctors to install pacemakers in some patients. Stage Three results in arthritic conditions in various joints. Unlike typical arthritis, Lyme Disease may only affect one side of the body or only one or two joints. Black-legged ticks are also carriers of a disease called human granulocytic erlichiosus or HGE. Some persons infected with Lyme Disease have also contracted HGE, possibly as the result of the same tick bite. For more information regarding tick-borne diseases, visit the website of the Centres for Disease Control.

Black-legged ticks frequent wooded areas and fields and are more common around homes and buildings in secluded or rural areas. Unlike the brown dog tick, this species is rarely found living indoors. If inside, it will generally be discovered on dogs or cats.

Ticks are difficult to control; therefore, the services of an experienced professional are recommended. Treatments may be necessary in areas of the yard where ticks are found. Bayer-Aventis is introducing the Maxforce™ Tick Control System that can be placed in wooded areas, frequented by white-footed mice, which are the principal hosts for black-legged ticks. Mice enter tamper-resistant stations to feed on a nontoxic bait block and, in doing so, make contact with an insecticide-treated strip. The insecticide, Fipronil, transfers to the mouse’s fur and kills any ticks present on the mouse and any new ticks that may try to attach themselves to the mouse later. (Fipronil is used for on-animal treatment products called Frontline™ to control fleas and ticks on dogs and cats.) The Maxforce™ System demonstrates the ability to significantly reduce the presence of ticks in an area. Studies have shown that the best results are seen after several years of consistent use. The system is best suited for homes and buildings bordered by wooded lots. The best way to avoid tick bites is to stay away from tick-infested areas.

 Wear long-sleeved shirts and long pants. Light colours are best so ticks are easier to detect.
 Secure the bottom of pants inside socks or tie close around the ankles.
 Wear a hat.
 Tuck long hair under a hat.
 Use tick repellent applied to clothing, particularly the lower body and the arms.
 Carefully inspect your body after exiting infested areas. Have another person inspect your backside and back of your head.
 Wash clothing in warm water and detergent immediately.
 Never throw potentially infested clothing in a hamper with other clothes or onto the floor.
 Protect pets by preventing them from venturing into tick-infested areas or consult your veterinarian for tick treatment products. Remember, your dog can also contract Lyme Disease.
 Inspect pets carefully for ticks after walking them in wooded areas or fields.
 To remove a tick imbedded in your skin, do not grasp it by the abdomen and pull. You may squeeze its fluids into your skin, which increases the chances for infection. Use a syringe or a fine-tipped tweezers to grasp the tick by the head next to the skin and slowly pull backwards. Working slowly permits the tick to withdraw its mouthparts so they do not detach and remain in the skin and become infected. Once the tick has been removed, cleanse the area well with soap and water. You may want to disinfect the bite site with alcohol or apply an antibiotic cream.