Varies between species, but most measure about 2 inches fully grown.

Can vary widely between yellow, blue, reddish brown, and black. 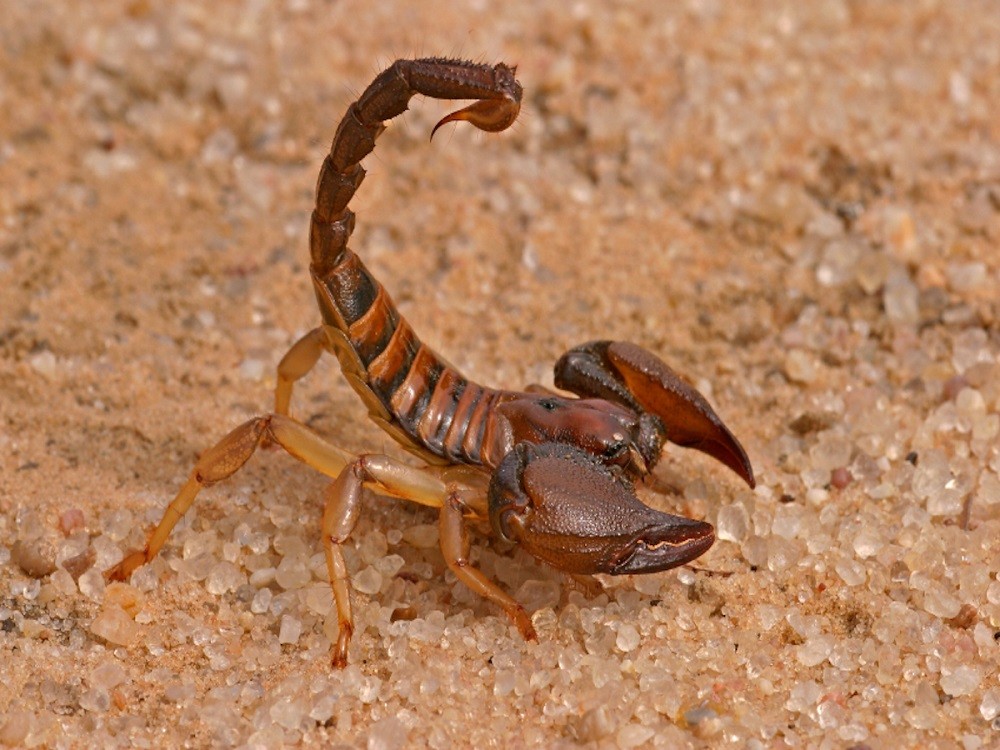 Scorpions are predators that feed primarily on insects. They crawl into buildings through exterior cracks in search of food or suitable shelter. Once inside, they may wander into clothing, shoes, or a bed where someone might contact them resulting in a scorpion sting. Stepping barefoot on a scorpion is another common way to be stung. Any scorpion sting, however, can be serious to anyone that is allergic to insect stings. A physician should attend to all stings.

Scorpions are most active during the night, although they can also be seen during the day where it is cool and moist. Scorpions prey on insects, spiders and other invertebrates. They are able to detect their prey by sensing the preys’ vibrations as they move.

Scorpions are known for hiding and waiting for their prey. If the prey is small, they crush it or, if larger, inject it with venom; a complex mixture of neurotoxins that affects the victim’s nervous system. Although the venom is used to capture prey, scorpions can use it to defend themselves from predators or other threats. Once the prey is subdued, the scorpion will begin to feed. Scorpions are only able to ingest liquids so the solid matter is discarded after feeding.

Scorpions can be observed in many types of habitats. However, most scorpions prefer deserts and semi-arid regions. Most scorpions hide under logs, rocks, boards and clutter. Some, such as the bark scorpion, rest on vertical surfaces like trees, bushes and walls.

There are also quite a few scorpions that spend daylight in burrows. Scorpion burrows can be a meter deep, depending on the dryness of the location. To form a burrow, scorpions dig to a depth where moisture and temperature are suitable and comfortable. Burrows are usually only made to accommodate one scorpion. Only adult male scorpions leave the burrows for long periods to find prospective mates.

Scorpions also dwell in urban places, but the difference is that they are at greater risk of being killed or exterminated, since most people perceive them as a danger and will not take any chances.

To reduce scorpions around a home, eliminate as many piles of items or debris on the ground and keep dense vegetation to a minimum. All scorpions glow green under black light, so a portable black light can be used outside at night to find where scorpions are harbouring. When a home is chronically invaded by these arthropods, it is best to seek the services of a pest control professional to achieve long-term relief.