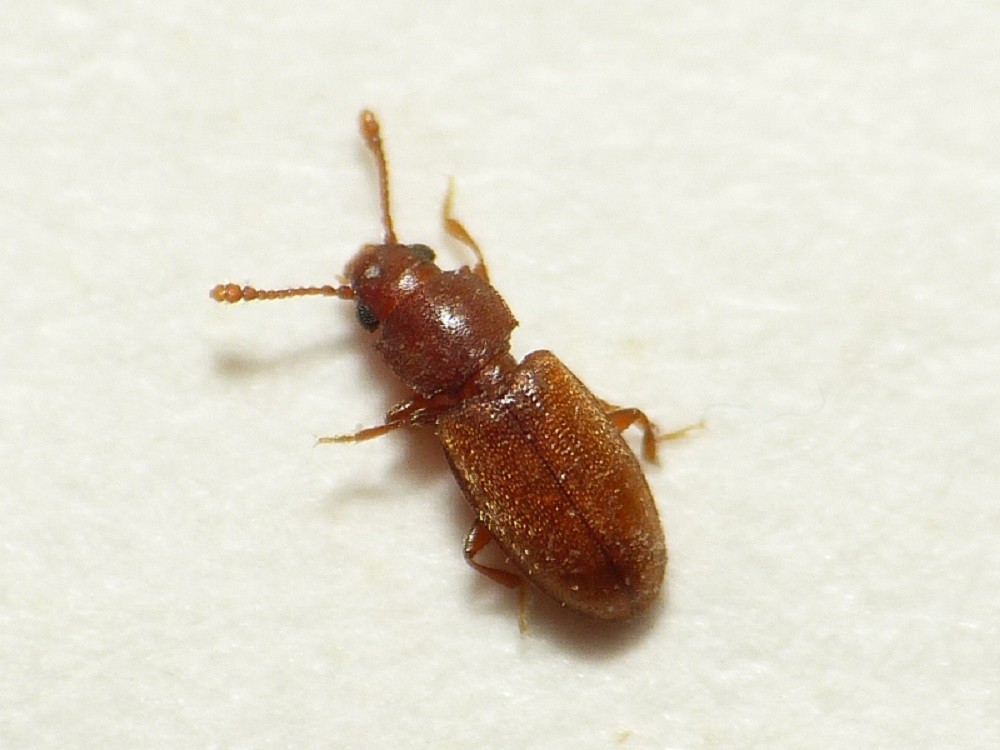 The biology of the foreign grain beetle is not well known. It breeds quickly, completing its cycle from egg to adult in as little as 30 days. It requires moist conditions and develops only when the relative humidity is above 65%. Huge populations are not uncommon under optimum conditions. In such situations, thousands of beetles are forced out of the breeding source in search of fresh media. Many homeowners are introduced to this beetle when purchasing a new home that’s only one or two years old. As a home is being constructed, rain and moisture inevitably fall onto exposed beams prior to the roof and walls being added. If enough moisture has accumulated on the wood, surface fungi may grow on the studs inside the walls. Foreign grain beetles will then enter the walls of homes from the outside and begin feeding and breeding on these surface fungi. After a period of many months to more than one year, the population of these beetles within the walls grows large. Beetles then begin to emerge by the hundreds from under baseboards, from behind electric outlets and from around light fixtures in ceilings. Larvae may also be found on floors near baseboards where adult beetles are found. As strong fliers, the tiny foreign grain beetles spread to all rooms of the house. Initially, only a few beetles may be seen, but when hundreds begin to emerge, homeowners may become annoyed and even panic-stricken and will call a pest management professional for help. Fortunately, the fungi in the walls are not damaging to the wood. It dies after the wood finally dries out, but one to three years may pass before this occurs. The foreign grain beetles also die; however, treatments may be needed in those situations where large numbers are being seen. This same phenomenon may also be encountered in older buildings or other buildings where poor ventilation, water leaks or poor drainage create conditions promoting fungal and mould growth.

A worldwide pest, foreign grain beetles are fungus feeders and are even capable of surviving on pure mould cultures. As a food pest, it is not a great economic concern, because it only attacks grain products that are moist, mouldy and out-of-condition. Food products attacked include cereal grains, flours, beans, dates, figs, biscuits, yams, tobacco, cocoa, groundnuts, copra and palm kernels.

The control of the foreign grain beetle involves many steps, primary of which is discovery of infested food items or other sources of infestation (e.g., moist areas). This beetle is almost always found to be a pest in newer homes only. When found in older homes, the source is most likely water leaks or other moist conditions that are supporting fungus growth. For example, they may live in a poorly ventilated attic or crawlspace. The beetle infestation will subside once the moist conditions are addressed and dried out. In new homes, however, time will be needed for the moisture to eventually evaporate, sometimes lasting two or more years after construction. In the meantime, homeowners plagued by large numbers of beetles should contact a pest management professional for assistance.