Kings and queens are brownish in colour. 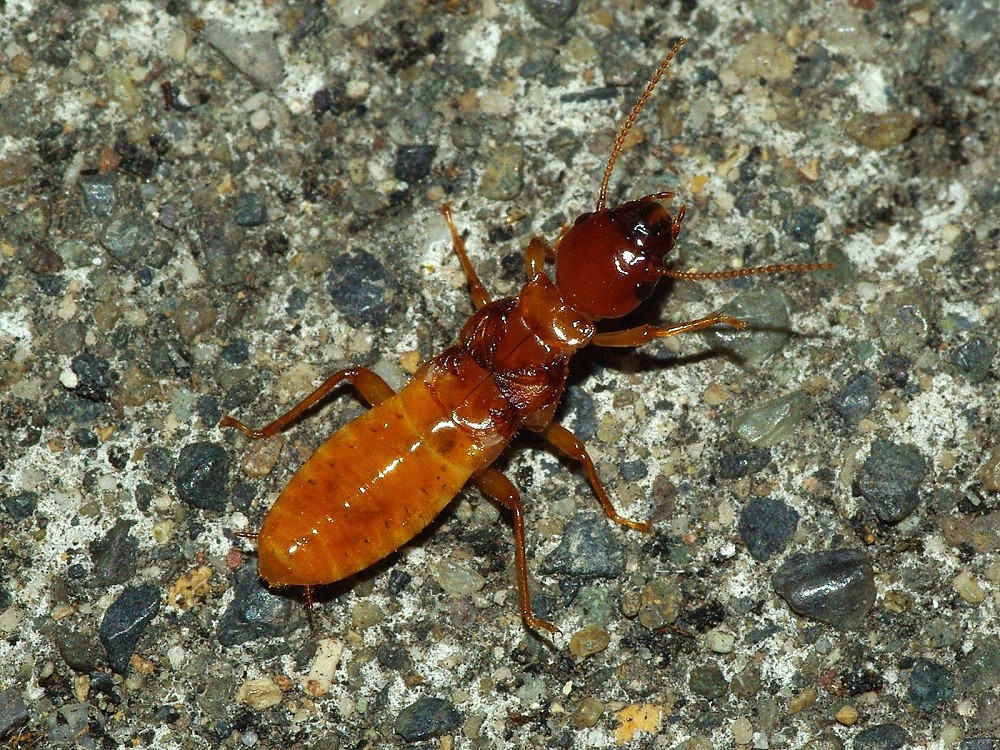 Damp-wood termites are social insects that live in colonies, consisting of several specialized forms. A mature colony may release “swarmers” (winged males and females) in late spring through fall, depending on the species. The swarmers have well-developed eyes, are pigmented in various shades of brown and often have wings that are “smoky” in appearance. After pairing, males and females will shed their wings and may infest stumps and fallen logs. They now become the king and queen of a new, developing colony.

The majority of the damp-wood colony consists of nymphs (immatures) that are pale and soft-bodied. Although they have no true worker caste, the nymphs perform the basic “house-keeping” duties similar to subterranean workers. This involves enlarging the gallery system, tending to the needs of the king and queen, care of the eggs and newly hatched young, and obtaining food for other colony members. As nymphs mature, they become reproductives (alates) or soldiers. The soldiers have pale, soft bodies, but large, dark, hard-shelled heads with powerful mandibles. The soldiers defend the colony against invasion by ants. Because their mandibles are so specialized, they are unable to feed themselves, and must rely on care from the nymphs. Physically, damp-wood termites are larger than the subterranean and dry-wood termites, and the damp-wood soldier can be quite formidable in appearance.

As their name implies, damp-wood termites infest wood that has an excessive moisture condition, and therefore are not often found in structures.

Because damp-wood termites infest wood with excessive moisture content, it is unlikely they would infest a structure. However, leaky plumbing, faulty gutters or downspouts, or snow drifts against wood exteriors could result in the moisture levels required for infestation by damp-wood termites.