Robust wasps with hairy, reddish and black areas on the thorax (middle part) and are black to reddish brown marked with light yellow stripes on the abdominal (rear) segments. The wings are brownish. 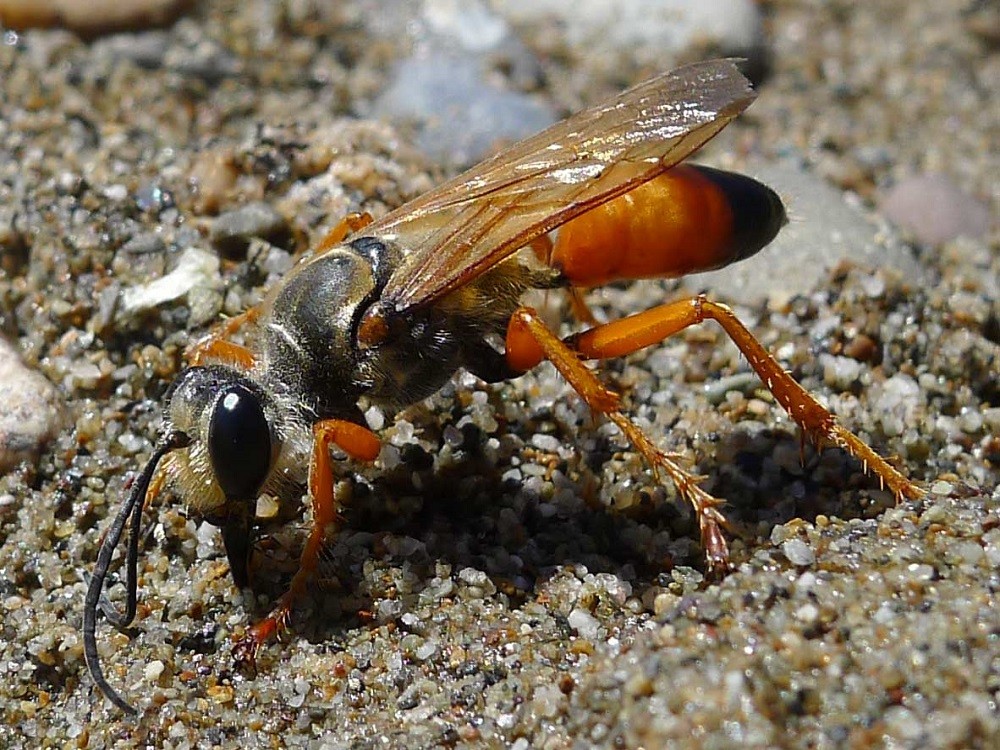 Solitary wasps are very different in their behaviour from the social wasps such as hornets, yellow jackets and paper wasps. Cicada killer females use their sting to paralyze their prey (cicadas) rather than to defend their nests; unlike most social wasps and bees, they do not attempt to sting unless handled roughly. Adults feed on flower nectar and other plant sap exudates.

This ground burrowing wasp may be found in well-drained, sandy soils, to loosen clay in bare or grass-covered banks, berms and hills as well as next to raised sidewalks, driveways and patio slabs. Females may share a burrow, digging their own nest cells off the main tunnel.

Although cicada killers are large, female cicada-killer wasps are not aggressive and rarely sting unless they are grasped roughly, stepped upon with bare feet, or caught in clothing. Males aggressively defend their perching areas on nesting sites against rival males, but they have no stinger. Although they appear to attack anything that moves near their territories, male cicada killers are actually investigating anything that might be a female cicada killer ready to mate. Such close inspection appears to many people to be an attack, but male and female cicada killers do not land on people and attempt to sting. If handled roughly, females will sting, and males will jab with a sharp spine on the tip of their abdomen. Both sexes are well equipped to bite, as they have large jaws; however, they do not appear to grasp human skin and bite. They are generally non-aggressive towards humans and usually fly away when swatted at, instead of attacking.