Adults are dark brown and oval in shape with varying patterns of tan and yellow markings on wing covers. Larvae are tan and have a long body covered with stout hairs. 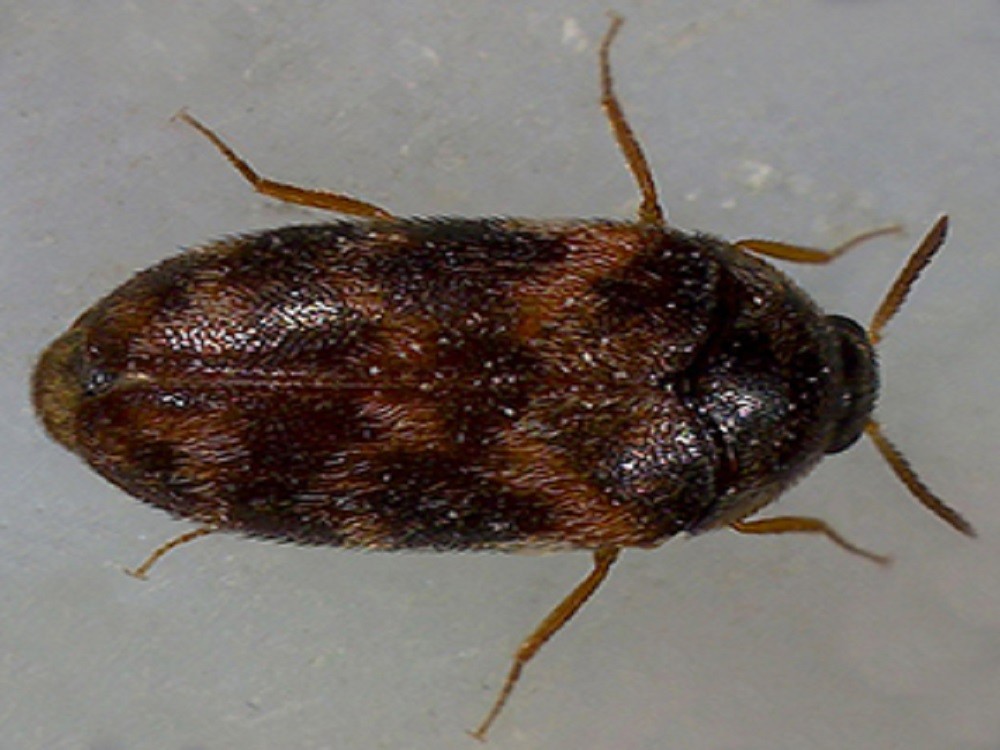 Several members of the genus Trogoderma in the Dermestidae beetle family are important pests of stored food products as well as of fabrics and hides. Both the adults and larvae of Trogoderma are often difficult to distinguish from one another and generally require an entomologist strongly familiar with the taxonomy of these beetles. The species involved in this group include the Khapra beetle, T. granarium, the warehouse beetles, T. variabile and T. ornatum and the larger cabinet beetle, T. inclusum and the cabinet beetle, T. glabrum. Other species may also be encountered. In most cases, pest management professionals refer to these beetles simply as Trogoderma beetles or use the term “warehouse” or “cabinet” beetles. Warehouse and cabinet beetles are a nuisance to insect collectors around the world, because they infest boxes of stored, dried insects and reduce them to collections of dust and insect parts. Therefore, any accumulation of dead insects in walls, windowsills, light fixtures or an insect light trap can serve as a source for infestations of Trogoderma beetles. Trogoderma beetles are also considered a potential health hazard in food products. The hairs on the larvae are equipped with barbs or are sharply pointed. Hairs shed by this beetle can be irritating to the mouth, esophagus and digestive tract of many people who ingest the hairs left on their food. The life history of Trogoderma beetles vary among the species. For example, the warehouse beetle female, T. vaiable, deposits up to 90 or more eggs within the infested food source. The larvae are very active and crawl throughout the infested product and also move into adjacent areas to infest other food sources. In warm conditions, the entire life cycle can be completed in as little as 45 days. Conversely, the life cycle of T. ornatum, a species very common in homes, takes about six months from egg to adult under optimum conditions. Adult females of the larger cabinet beetle, T. inclusum, deposit up to 45 eggs within the food source and these hatch in 8 to 12 days. The entire life cycle of this species is completed in about six months.

The warehouse beetle, T. variable, derives its name from the fact that it is the most common species found in warehouses. It has the widest food preferences of any of these beetles, feeding on a wide variety of foods, including cereals, candy, cocoa, cookies, corn, corn meal, fish meal, pet foods, flour, nuts, dried peas and beans, potato chips, pastas, spices, dead animals and dead insects. The warehouse beetle is a common pest in seaports around the world. A closely related species, T. ornatum, is primarily a pest in museums, especially to insect collections. It occurs outdoors in the cracks of hollow trees and in bird nests. This beetle may be the most common species found in homes and is common in attics. It will feed on the carcasses of dead rodents, dead insects and rodent baits in attics, basements and crawlspaces. This beetle also attacks wool, feathers, furs, skins, bee glue, cocoons, grain, nuts, wheat, corn, malt, cayenne pepper, old flower bulbs, pumpkin seeds, castor beans and tobacco. One report describes T. ornatum larvae feeding on dead termites in drywood termite galleries. Another cosmopolitan species is the larger cabinet beetle, T. inclusum, which is a pest of seed collections. It also can be found in stored wheat, rice and corn as well as woolen clothing, dried insects, dried casein and corn meal. Because many Trogoderma beetles occur naturally outdoors and are able to fly, total elimination of these beetles in a home or commercial building may not be possible in many areas.

The control of Trogoderma beetles involves many steps, primary of which is discovery of infested food items or other sources of infestation (e.g., dead insects, animal carcasses, items made of wool). Because these beetles can survive on such a wide variety of items, elimination of infestations is very difficult, if not impossible in many situations. All dried food products need to be inspected for signs of infestation, including cereals, packaged dried foods (e.g., food bars and chocolate) and pet foods. Window sills, light fixtures and the attic need to be checked for accumulations of insects. Also in attics, the presence of old rodent bait, dried animal carcasses (usually mice), bird nests and items made of wool, horsehair or other natural fibres needs to be noted. The basement, garage and crawlspace, if present, will require a similar inspection. Homeowners should remember if the home has ever experienced an infestation of lady beetles or cluster flies as large numbers of these insects can often die in larger numbers inside walls and attics. Also, it is important to note where yellow jackets may have nested within a wall. Infestations may also be associated with caches of nuts and seeds accumulated by squirrels or rodents within attics, walls and chimneys. A pest management professional can be helpful in finding difficult infestation sources.

Consider the following to prevent an infestation:

 Discard infested foods in outdoor trash. Infested decorations (flowers, wreaths, etc.) should also be discarded.
 Discard bird nests, animal carcasses, dead insect accumulations and old rodent bait.
 Freeze suspect foods at zero degrees Fahrenheit for six days.
 Clean cabinets and shelves where infested foods are stored by vacuuming and by using soap and water.
 Store all dried food goods, including dried pet foods and birdseed, in a glass or plastic container with a tight lid. If beetles are in that food product then the infestation will be contained and not spread to other foods.
 Consider storing cereals and similar foods in the refrigerator to limit stored product pest problems.
 Consume older food products prior to newer purchases of the same food. Products purchased in larger quantities (e.g., from a wholesale food warehouse) are more likely to become an infestation source if these are stored for long periods of time – especially if they are not stored in containers with tight-fitting lids.