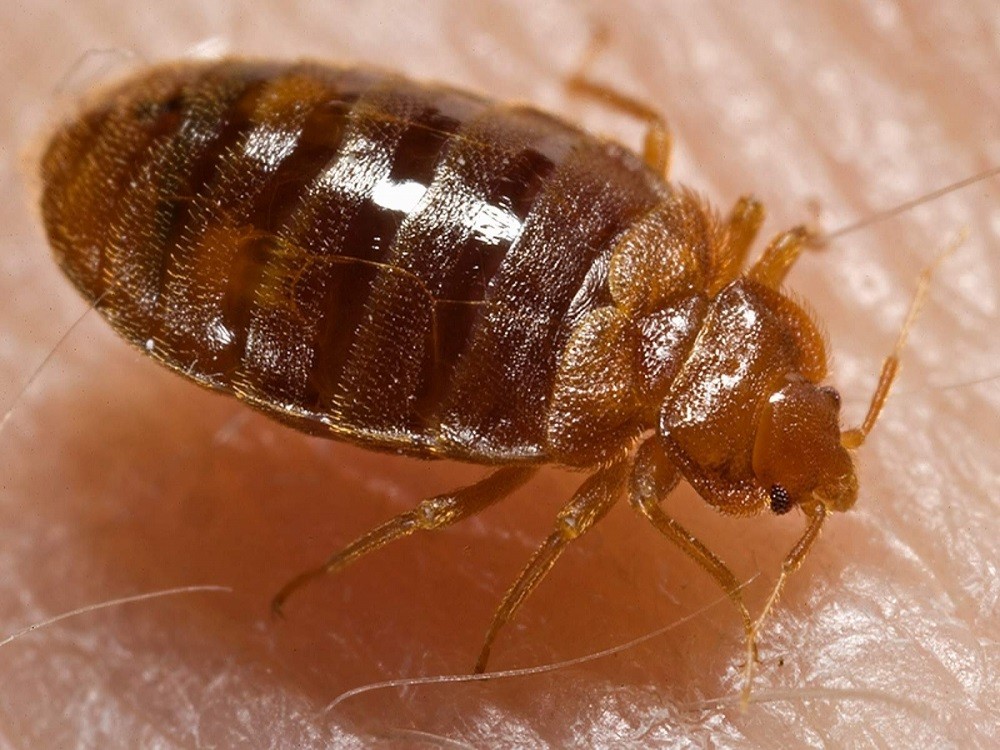 It is likely that bedbugs are the most commonly known ectoparasites to humans. Nearly every child has heard the reminder, “Sleep tight. Don’t let the bed bugs bite!” Prior to World War II, bedbugs were fairly common in homes. Due to the introduction of modern pest control products in the 1940s, this insect faded from the scene and has only recently reappeared as a unique pest problem in buildings. These parasites are blood feeders and they crawl into beds during the night while their victims sleep. The bite is painless and a number of bedbugs may feed for an extended period of time on any area of exposed skin. The resulting bite wound may show generalized minor swelling into a raised bump followed by itching. Commonly, skin reactions to bedbug bites may not show up for 1-2 weeks after the bites. Fortunately, bedbugs do not carry or transmit any human disease, but the mere presence of any blood-feeding insect is disconcerting, at best. Eggs are deposited in small cracks in the bed frame, mattress seams or in baseboards, trim or furniture near the bed. The first instar nymphs that hatch from eggs are tiny, no larger than a letter on a penny. Five nymphal stages occur to reach the adult stage and each requires a blood meal. The nymphs and the adults reside near one another, hiding in such cracks awaiting nightfall when they might venture out to feed. In some cases, the offending bedbugs are harbouring many feet from the bed in cracks in furniture, baseboards, doorframes, or even within voids in the wall. If populations become large, or when a host becomes scarce because no one sleeps in the bed for a period of time, bedbugs may crawl into other rooms or squeeze through walls to enter neighbouring locations. They may also be transported from place to place hiding in furniture, clothing and blankets.

Bed bugs infest homes, hotel rooms and apartments by hitching rides on luggage, furniture and other items carried from an infested room to another location. It takes but one female bug or a few eggs deposited onto a bag to begin a new infestation elsewhere. Typically, an infestation begins in a single motel/hotel room or apartment and then spreads to neighbouring units. Bedbugs spend the day resting in cracks or voids of furniture or walls.

Positive identification of bedbugs is important, because their close relatives, bat bugs and swallow bugs, can easily be confused with them. Misidentification can lead to unsuccessful control efforts. Evidence of bedbug activity includes live and dead bugs, dark spots on a mattress, box springs or bed frame, blood spots on sheets and empty tan coloured skins that are left behind when bedbugs shed their skins to moult into the next stage. Bedbugs are very difficult to eliminate, therefore consultation with an experienced pest control professional is highly recommended. Successful control depends on finding every crack or void where the insects are harbouring and removal of the bugs by vacuuming or treatment of the harbourage with an appropriate product. Overlooking even the smallest crack in furniture may lead to a persistent infestation; therefore, beds, nightstands and related furniture often require disassembly and careful inspection. Carpets may need to be gently lifted along the edge and the space beneath treated. Baseboards, door and window frames, and any visible crack will require treatment in infested rooms. Should furniture be moved from an infested unit to another unit, it should be carefully inspected and cleaned or treated as necessary to prevent the spread of bed bugs to the new room. Furniture that is to be thrown out needs to be defaced such that it is unusable and/or marked as infested with bed bugs. People should take care when purchasing furniture at garage sales and should carefully inspect all sides for evidence of bedbugs. Picking up furniture that is seemingly in good condition left on the street for trash pick-up is not recommended.